During the War of 1812, the U.S. used government-licensed private armed vessels, known as privateers. These ships were not part of the American navy. Their task was to detain, seize, and take enemy vessels, their crews, and their goods. They then would bring these men into U.S. ports for prosecution. So privateers were in part “sanctioned pirate ships”.

The schooner Dash was one of the fastest and most feared privateering American ships during the War of 1812.  Dash was built at Porters Landing, Freeport, Maine in 1813 by master builder James Brewer for Seward, Samuel, and William Porter, all born and raised at Porters Landing and part of a family of  twelve brothers, most of which were involved with the sea in some fashion.  Dash was designed with 16 guns and another ten fake “quaker” wooden ones to fool its enemies. She was also designed to be  fast, enabling her to evade British warships that blockaded the Portland Harbor. Eventually she was re-rigged with a unique sail to increase her already impressive speed.

The Dash was able to break Portland’s blockade three times in 1813, with a cargo of lumber for trade. She returned from the West Indies, having traded for coffee and sugar cane.

In 1814, she was commissioned as a privateer and re-armed with more guns and more men, most of which was from Freeport. The Dash was able to capture fourteen enemy ships, remarkably without one single injury to her crew.

In January of 1815, she left port with another privateer, the Chamberlain. As she pulled ahead she ran into a heavy gale. The Chamberlain turned back, but the Dash continued on, and was never heard from again. It is not known what happened, but some say the captain underestimated her speed and ran her aground on the treacherous shoals of the Georges Banks, a large elevated area of the seafloor that separates the Gulf of Maine from the Atlantic Ocean. 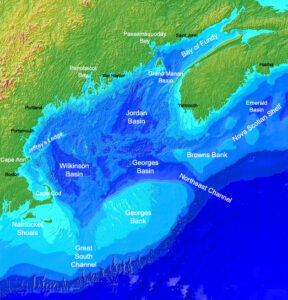 Within a month of the Dash’s disappearance, fishermen in Casco Bay swore they saw the Dash bearing down on them through a mist. As the ship turned and headed for Freeport, they claimed to see the words “Dash and Freeport” written on her bow.

Over the years, these sightings continued. Fishermen and other boaters reported that this schooner seemed to appear out of nowhere, and always in a fog. Eye witnesses have noted that despite the fact there wasn’t any breeze the sailing ship appeared to be moving quickly.

As more sightings of this ship were noted, legend began to circulate about the Dash, stating that when a descendant of one of Dash’s sixty crew members dies the ship returns to bear these loved ones on their final journey.

Perhaps, one of the most well known stories is from the 1940s during WWll, where a U.S. naval ship and coast guard boats that were protecting Casco Bay claimed they saw an unusual sight one foggy afternoon. When a blip was noticed on their radar screens the sirens went off and all men reported to their stations and they headed for the spot of the signal. They were surprised to see a 19th century sailing schooner cruising along the channel headed for Freeport. By the time they reached the old ship, it had disappeared. This sighting has been written about several times and has gone down as one of the most bizarre occurrences on the East Coast during the war.

Perhaps if you are sailing the Casco Bay one foggy morning you too might catch a glimpse of the Ghost Ship of Casco Bay.