Everyone has heard of this iconic landmark, but did you know the The Taj Mahal Palace Hotel is said to be haunted? This iconic Mumbai landmark has seen its fair share of modern tragedy.

Since opening to guests in 1903 The Taj Mahal has attracted Indian Maharajas and Princes, who sought luxurious escapes from their States. Over the past century, The Taj is known as  THE place to be and where it all happens, including India’s first licensed bar – Harbour Bar (Bar License No. 1), India’s first all day dining and India’s first discotheque. It is also renowned for its many entertainment options  from classical orchestras, British Regiment bands to dance performances and opera. It’s no surprise that The Taj has attracted many well-known guests like: Alfred Hitchcock, Duke Ellington, Prince Charles, George Bernard Shaw, Andrew Lloyd Weber, Bill and Hillary Clinton, President Obama, Mick Jagger and David Rockefeller to name a few. Muhammad Ali Jinnah’s second wife Ratanbai Petit lived here during her last days in 1929.

Its past hasn’t always been a pleasant one though. During World War I the hotel was converted into a military hospital with 600 beds. It also sustained a vicious terrorist attack in 2008. This saw a number of guests held hostage within the hotel, resulting in 137 deaths, with 31 of these deaths occurring within the Taj Mahal Palace Hotel. 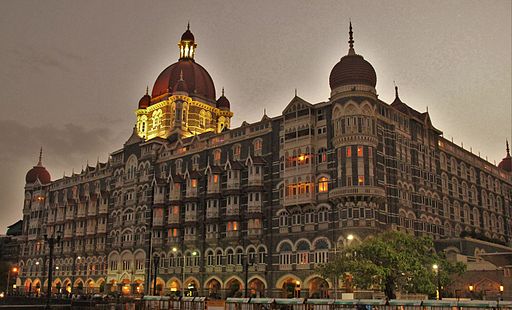 Its troubling past goes back to its very origins. French architect WA Chambers designed the hotel, but in his absence the hotel had been built facing in the opposite direction to which he intended. Unfortunately the construction has already progressed too far to be corrected. He became so distraught about the mistake that Chambers went up to the fifth floor, threw himself out the window, where he fell to his death.

Staff have reported seeing the mournful spirit of a man wandering around what is now the old wing of the hotel. Many claim that it is Chambers still looking after the hotel. Staff and visitors have reported to see him, hear him and one staff member was physically assaulted, being knocked unconscious because he was attempting to steal precious silverware.