Vermont is famous for its quaint covered bridges, this covered bridge is not just quaint, but is said to be haunted.  Located in the town of Stowe just down the road from the  “Ikonic” ski mountain, the Gold Brook Covered Bridge, also known as Stowe Hollow Bridge is often referred to by locals as  Emily’s Bridge, named after Emily who died on the bridge in the 1950s and still lingers on the bridge till this day.

There are many legends of how Emily died on the bridge.   One story states that in the 1950s a teenage bride-to-be named Emily, fell in love with a young man from a rich family. The young man’s parents refused the wedding, because Emily was from a poor family. He told her to wait on the bridge for him at midnight, but when he didn’t show up, she was so distraught, that she jumped off the bridge into the brook below and died.

Another version claims that Emily was supposed to elope with her lover who was meeting her at the bridge at midnight, and when he didn’t show, she hung herself from the rafters.

Another version also starts out as a love story. The young couple made plans to marry, but on the day of their wedding, Emily goes to the church in her beautiful red wedding dress ready to marry, but the groom never arrived.  The jilted bride took the family wagon in a frenzy of anger and sorrow traveling at an incredible pace.  As she approached the bridge, she failed to negotiate the turn right before the bridge and drove the horses and carriage over the bank and onto the rocky brook below. Both the horses and Emily were killed in the accident.

There is no written historical evidence that Emily ever existed. The first mention of the bridge being haunted by someone named “Emily” came around 1968 when a high school student wrote a paper on the subject. He claimed that while he was using a Ouija board on the bridge, an entity presented itself named Emily. Other people using Ouija boards have reported that an entity has identified itself as Emily and said that she was killed on the bridge by her fiance’s mother. 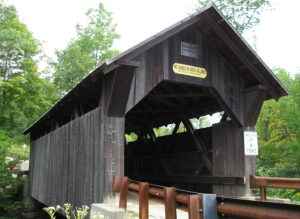 Many people who have visited the bridge have experienced paranormal activity like orbs, some activity has been disturbing.  People have reported scratch marks appearing on vehicles that were parked on the bridge and being touched or scratched by Emily’s ghost.  Often strange noises are heard on the bridge, such as footsteps, ropes tightening, and a girl screaming. Many have also reported seeing a white apparition around the area of Emily’s Bridge. People that have parked their vehicle on the haunted bridge say they tend to hear banging noises from Emily hitting the vehicle on the outside, or a dragging sound across the tops of their cars. The most distinct paranormal events tend to take place between the hours of 12 AM and 3:30 AM.

You are my favorite! Seriously. I would love to date you… Well I am sure you have a fan club already.. By the way, I have never been here. Sounds like I should do a tour around this area. Have you ever heard of the Green Mountain Inn’s Tap Dancing Ghost?

I am glad I haven’t “spooked” you too much. Maybe you can join me on the next ghostly adventure. 😉

Consider it a date!